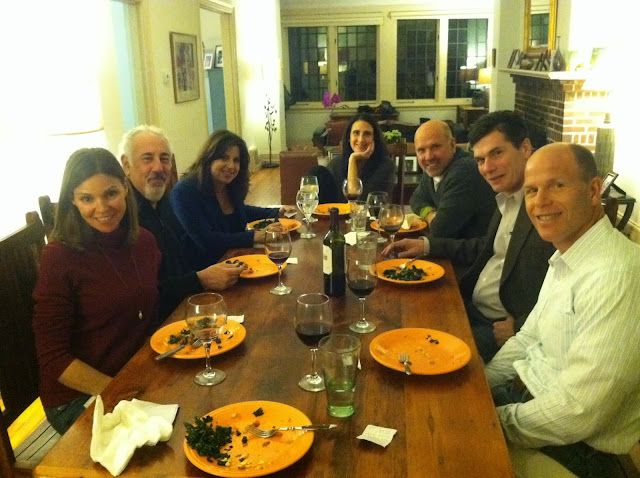 December is a month to make sure your freezer is full with all the good tasting, healthy food you worked so hard to raise.  It's also a good time to share that good food with friends. 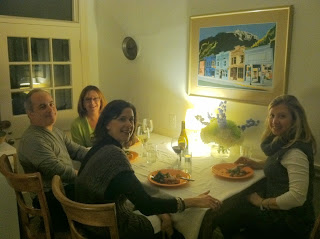 This year the Benners decided to entertain a dozen friends and the menu (at end of post) was almost entirely made up of food produced at Old School Farm.  Al's beet saute was pretty amazing (thanks for the ingredient tips Dave :) , but it was Deena Benner's quiche that stole the show.  Great company of friends and fresh farm ingredients - nothing can beat it.

Turning to more serious issues for this time of year, early winter is a time to make sure the freezer is stocked with venison for the coming months.  Al had been unsuccessful with his new crossbow, so now it came down to gun season. When the chips are down and a deer is needed, the Camilli clan (friends of the Benners) can usually be
counted on to deliver some venison.  This year was no exception as Rocco Camilli bagged a button buck with his 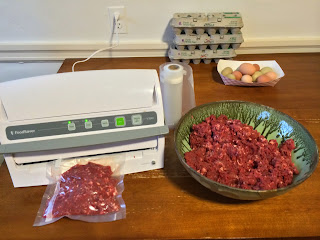 antlerless deer tag in the wooded hillside at the farm. Dave and Al butchered it, and then the vacuum sealer took over, and now the meat is in the freezer.

Also over the holidays, a visit was paid to the farm by the parents of the Benner's sister-in-law, Lisa Seligsohn. Don and Charlotte Whitman from Maine/Virginia, just happened to time it right and enjoyed some of the Old School turkey leftovers in a hearty soup Al had made (the same turkey the Whitmans had eaten three days before at the Benners on Thanksgiving).  While Charlotte toured the farmhouse and viewed old photos of the farm, Al showed Don around the property, even paying a visit to the remainder of the turkey flock that was spared as breeding
stock for next season.  Don ("Fixer Pop" to his grandkids) is an avid outdoorsman and DIY guy who has been following this blog regularly, so he was most interested in seeing things firsthand. We're glad the Whitmans stopped by!

Dave has been hard at work making repairs around the house and grounds as needed and getting everything secure and stowed away for what is looking like it could be a long, cold winter.  Most importantly he has been focusing on bringing in a lot of seasoned firewood that had been cut earlier this past year.  He's also now working on securing interns for next season and creating a detailed report for USDA regarding production in our high tunnel greenhouse (a requirement for the grant we received)

The ground inside the high tunnel was seeded with winter oats several weeks back and with 60 - 70 degree temps in there during sunny days, this cover crop is really taking off.  We are even attempting to over winter some of the serious eggplant "shrub" root stock - probably won't work, but we love to experiment - we've got about a foot of mulch on them. Speaking of mulch, the 400 asparagus plants are all mulched in for winter. 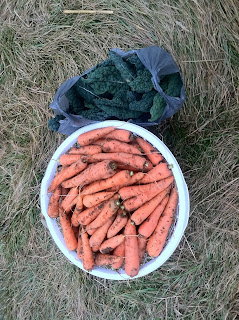 Finally, we are currently looking into the possibility of acquiring crop insurance for the flood plain growing area so we can have the peace of mind to expand our growing areas of vegetables.   We sell through the new Wayne County cooperative being organized by Sky Ballantine over at Ant Hill Farm. It's a great program where various farmers can list what they have extra of each week and local restaurants (and soon individuals) can order what they want and pick up at one of three weekly pick up locations.  Best of all each farmer sets their price for their offerings.  Last year our beets, carrots, kale and tomatoes moved very nicely and we would like to expand our offerings and volumes.

We'll be taking a break from the blog until mid to late January as there won't be a whole lot to report over the next few weeks.  Until next time we hope your holiday season is joyful and warm. 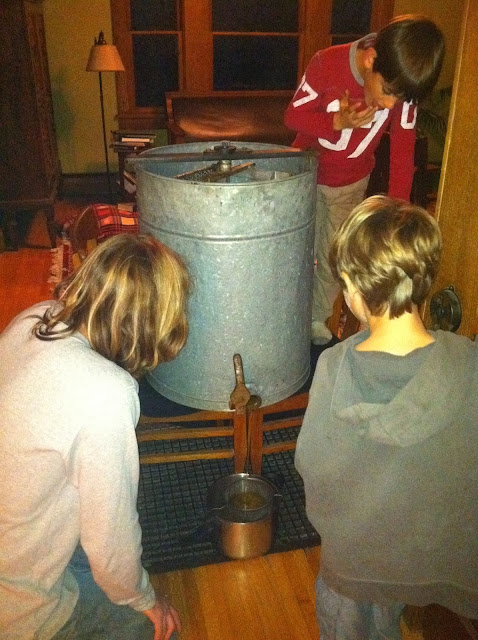 November is an interesting month in Northeastern Pennsylvania - one day it can be 65 degrees and downright balmy, thirty six hours later the thermometer can be hovering around 10 degrees.  We are currently in one of those cold snaps and the old Kalamazoo wood burning furnace has been pressed into round the clock service.

We've been putting a lot of things to bed for winter and already planning for spring.  We also just put "snow shoes" on our barn roof to keep the snow and ice from sliding off and seriously hurting someone.  The pump for the garden has been pulled out, the crops in the high tunnel that unexpectedly got hit by an early November freeze (we forgot to tie down the side and cold winds blew in one night) have been pulled out, and a good portion of the garden has been tilled and planted with winter rye - some of it got a nice jump start during a few of those warmer days this month. 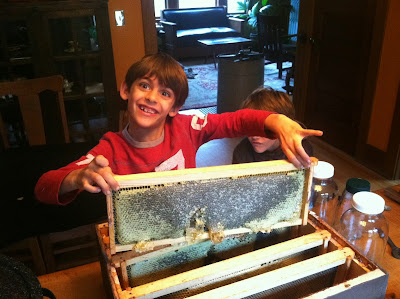 One project the Benner brothers really enjoyed this month was the spinning down of a few combs of our own honey.  This was the first year for doing this, as last year with a new colony, we felt it best to leave all the honey for the bees for winter food (honeybees do not hibernate, they keep their wings moving inside the hive so as to generate enough heat to keep from freezing).  Once or twice a winter they will exit the hive on a warm day to defecate - a necessity.  We borrowed a friend's antique galvanized hand spinner and cranked away for an hour or so, producing around 10 lbs of most delicious, light-colored honey.

This year we decided to focus on what we do best - raising happy and healthy pastured poultry, and 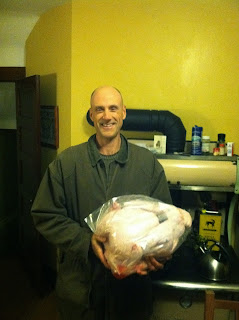 instead of slaughtering and butchering them ourselves, Dave took the birds on a short ride to the McDonald family's butchering operation at their 200 acre farm. Eighty year old Florence raved about the quality of our birds, and the first young rooster we roasted did not disappoint.  A 20 lb hen turkey is thawing in the refrigerator at this very moment for Thursday festivities.

We have harvested most all of our carrots now and all the beets are in.  The only crops left standing in the garden moving toward December are a few brussel sprout plants, a double row of rutabagas, and a double row of dinosaur kale.

We've been really enjoying an Ethiopian Potato/Cabbage/Carrot/Onion dish that is seasoned with cumin, turmeric, salt, and pepper and sauteed in lots of olive oil. Look up the recipe online - you won't be disappointed.  We've also been steaming our beets and then simmering these in a pan with some cumin and curry along with a few spoonfuls of yogurt and olive oil - very tasty.

Here's wishing you and your family a very happy and healthy Thanksgiving season.  Enjoy all the photos from the farm.  Oh, and no, Al Benner did not get a deer for the freezer yet - his attempts bow hunting with his crossbow turned up two bucks that, in the last light of day appeared to not have enough points ("tines" - 5 total needed) for them to be legal.  He did not pull the trigger.  Hopefully gun season yields different results.

Enjoy all the fun photos below... 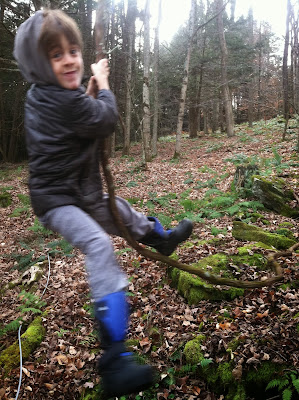 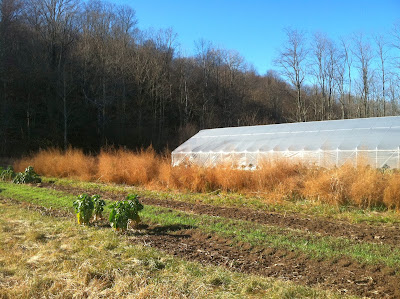 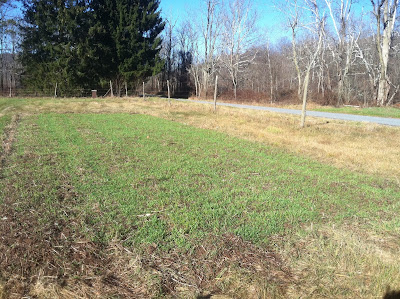